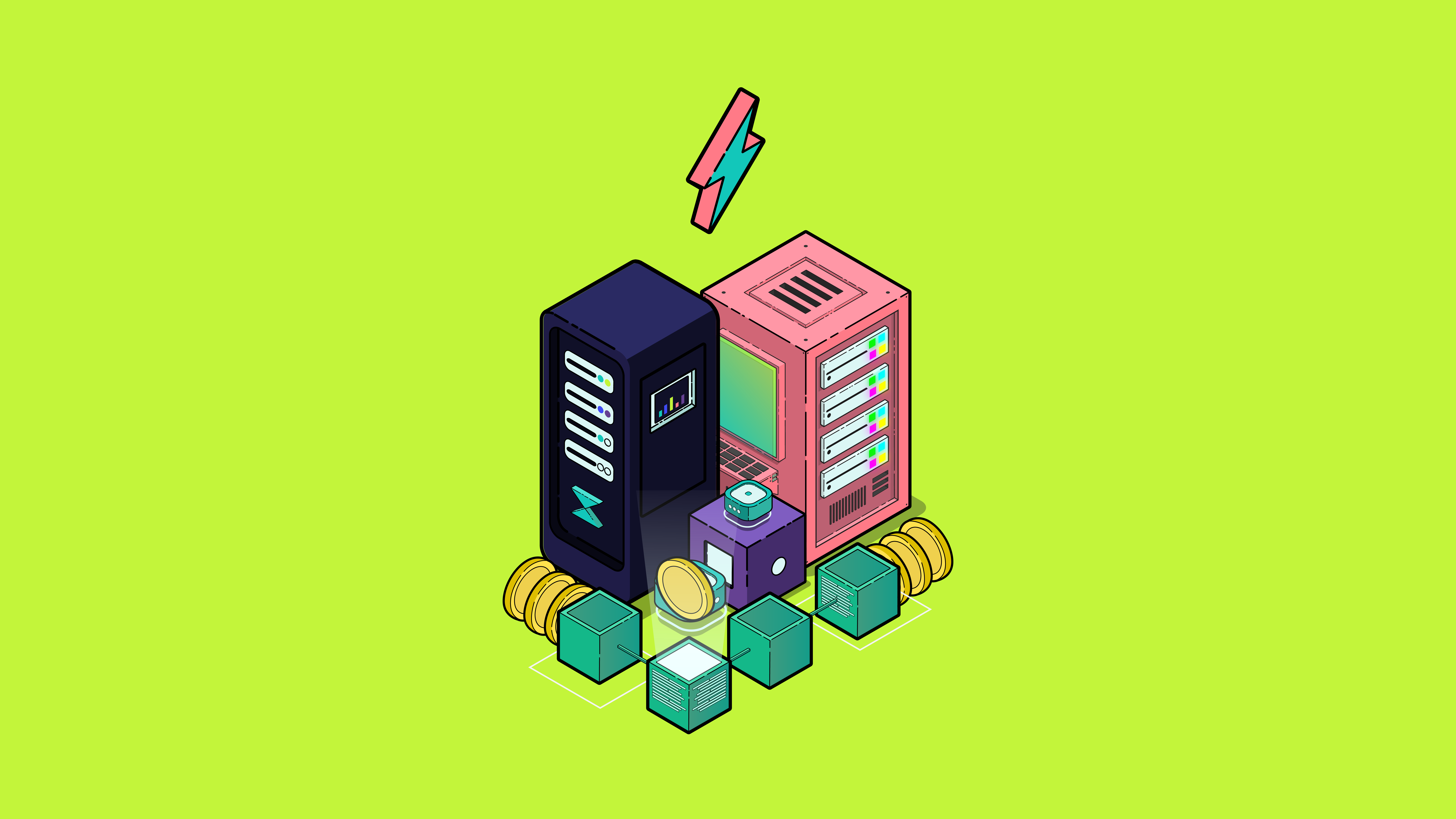 We can't let the environmental impact of crypto hold it back from mainstream adoption.

The world will not embrace an environmentally destructive blockchain community.
14 May 2021 —Alex Linton

The environmental impact of crypto — like Bitcoin — is the worst kept secret in the crypto industry. Everyone in the crypto community knows the harsh reality: blockchain technology (specifically, Proof of Work) uses an enormous amount of energy. Of course, this is by design — computational power is how traditional blockchains are secured.

The blockchain world is growing and expanding at a breakneck pace. In 2021, Elon Musk’s fascination with Bitcoin and other cryptocurrencies has poured ample rocket fuel into crypto’s propulsion systems. However, the brakes have been pumped by Musk’s announcement that Tesla is suspending vehicle purchases using Bitcoin due to environmental concerns. If we don’t change, things like this will keep happening.

The world will not embrace an environmentally destructive blockchain community.

People care about the climate. They care about sustainability. And if crypto doesn’t catch up with that mindset, it’s going to come up against a brick wall.

Every year, there are news headlines along the lines of ‘Bitcoin now uses more power than x country.’ Bitcoin is incredible, it is revolutionary, it is why we’re all here. But cryptocurrencies can’t expect to gobble up the energy equivalent of mid-sized countries without facing serious criticism.

Some people in the blockchain world are happy enough with trying to use renewable energy resources for mining — but this is nothing more than a symbolic victory. Even if it is renewable energy, we do not currently have unlimited capacity to create renewable energy. Sinking terawatts of renewable energy into securing proof of work blockchains is not an efficient use of energy, and it leads to dirty power being used down the line in other places.

Crunching the numbers on the crypto environmental impact

Bitcoin uses more power than 5 million people in Finland. More than 17 million people in the Netherlands. More than 200 million people in Pakistan. It’s 115TWh a year. That’s enough energy to power a 100W light bulb for 131,278,538 years. But if we want to keep the lights on long term, we’re going to need to reduce the amount of energy we are using to secure blockchains.

Ethereum is also proof of work (for now), and faces similar energy consumption problems to Bitcoin. But Ethereum has seen the light — and it’s heading towards Proof of Stake. Proof of Stake is a much more environmentally sustainable way of securing blockchains, and it is hoped Ethereum’s transition will cut its energy consumption by 99 per cent. Instead of demanding more and more computational power (and thus, energy), the blockchain is secured economically.

At Oxen, we’ve already rolled out our Proof of Stake implementation, Pulse. Thanks to the full removal of Proof of Work, Oxen is more efficient and eco-friendly than ever. With the technical requirements and specifications for a service node, and assuming it is running 24/7, a service node can be expected to chew up about 1,400 KWh per year. With 1,700 service nodes, the network would consume 2,380,000 KWh in a year.

And only 0.006% of the energy consumption of Ethereum.

Elon said he was looking for currencies that use <1% of Bitcoin’s energy/transaction — Proof of Stake is the way to achieve this. 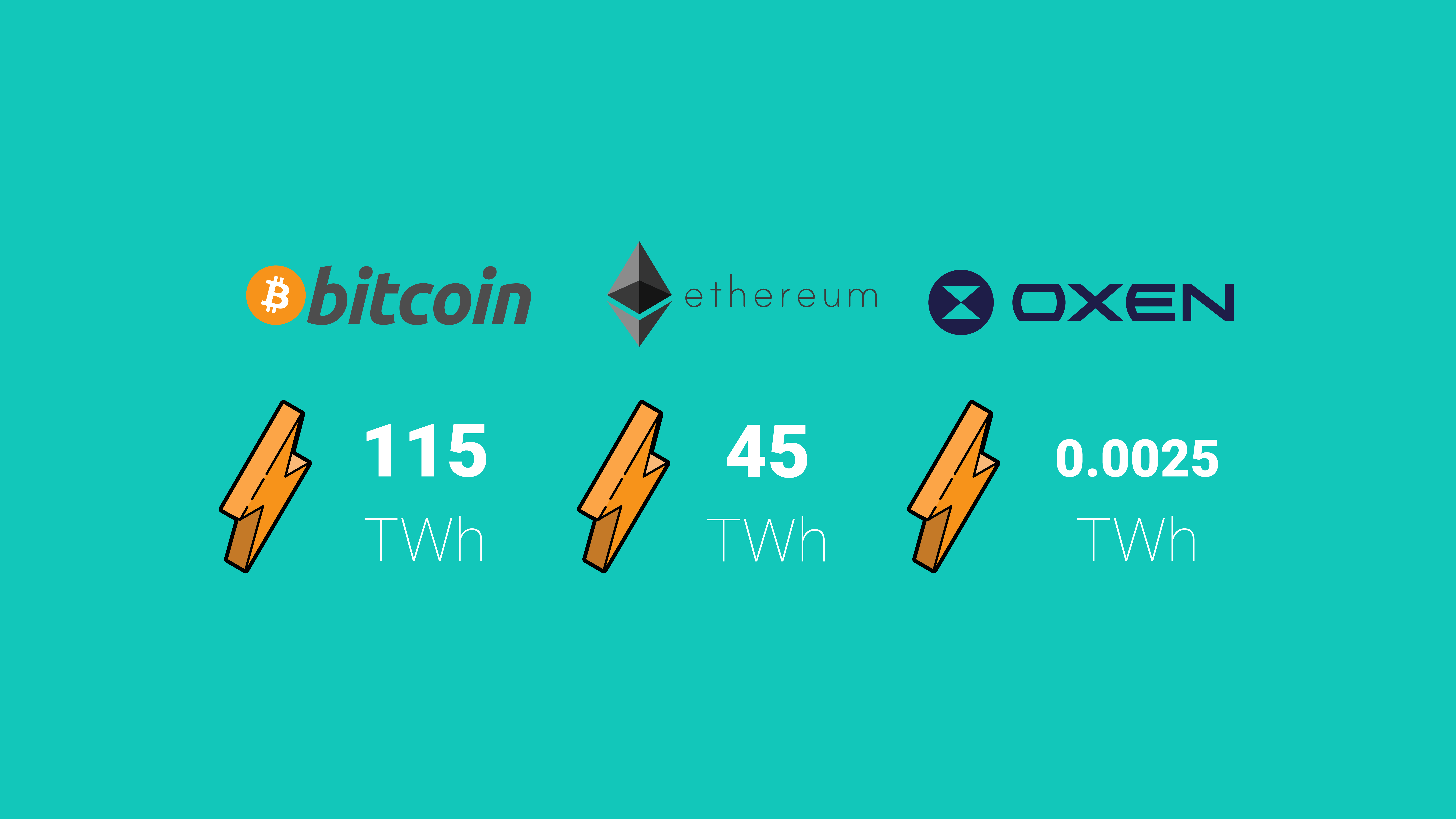 Now, you might be saying, ‘wait a minute, way more people use Bitcoin and Ethereum than Oxen!’ And you’d be right (for now, at least). But no matter how much the Oxen network scales up, it’s never going to use this much energy.

For Oxen to use as much power as Ethereum does now, there would need to be over 30 million service nodes.

For it to use as much power as Bitcoin does, there would need to be over 78 million service nodes.

With every service node requiring at least 15,000 OXEN staked, it would require 450 billion OXEN to create 30 million service nodes. Given that there is currently less than 55 million OXEN in the circulating supply, this is not possible. It will never be possible.

The energy cost of running a network like Oxen will always be a fraction of what Bitcoin and Ethereum currently use. No matter what.

Proof of Stake is just one way to make blockchain technology more environmentally sustainable. For Oxen, Proof of Stake makes sense, and it’s a perfect fit. But don’t get it twisted: PoS won’t suit every blockchain under the sun.

The blockchain community is full of innovators and out-of-the-box thinkers, and there will undoubtedly be many ideas, solutions, and experiments that emerge over the coming years to try and solve the crypto climate crisis. But the reality is this: crypto is going to have to go green. At the end of the day, it’ll be better for everyone. Better for the people who are already holding heavy bags. Better for the family members you’ve gifted crypto to. Better for the people who haven’t even heard of crypto yet.

Oxen has been on this train for a long time. We’ve already made the leap from PoW, to hybrid PoW/PoS, to full PoS. It wasn’t an easy path — but it was the right one. Lots of other projects have done the same, and more are joining all the time.

If we want blockchain to go big, we have to make it scalable. And environmental impact is one of the major considerations we have to make. Let’s get moving.