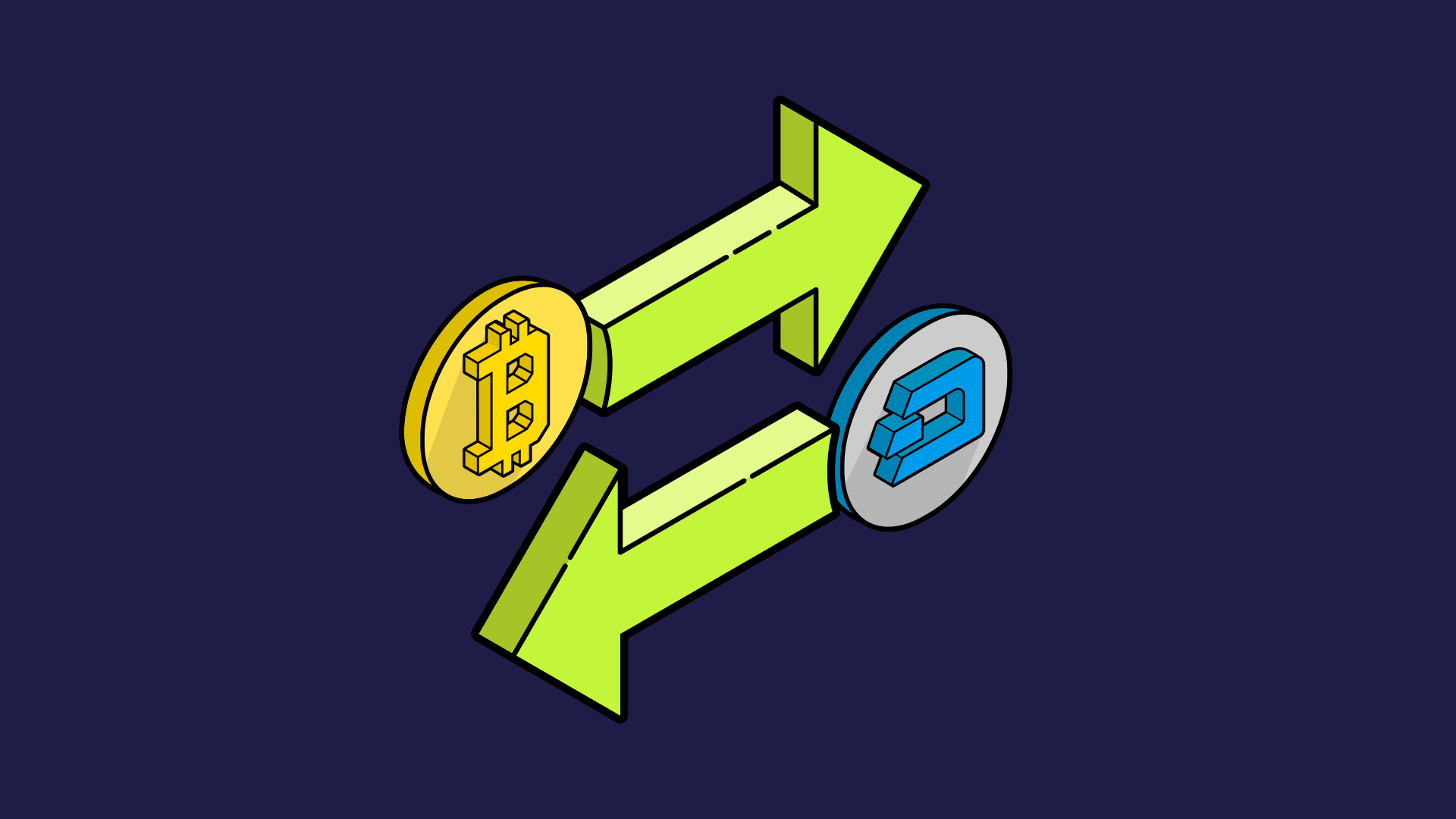 Disclaimer: The information on this website is for general information purposes only. It is not intended as legal, financial or investment advice and should not be construed or relied on as such. Before making any commitment of a legal or financial nature you should seek advice from a qualified and registered legal practitioner or financial or investment adviser. No material contained within this website should be construed or relied upon as providing recommendations in relation to any legal or financial product. Oxen does not recommend or endorse specific products and does not receive remuneration based upon investment or other decisions by website users.

We’re covered the basics of buying, storing and selling cryptocurrency. Now, it’s time to take things up a notch and take a look at cryptocurrency trading.

But before we get too deep, it’s important to note the difference between investing and trading.

Investing involves gradually building wealth over an extended time period — often years, through the buying and holding of assets. Investors will “ride out” downturns in the market, holding onto their investments with the expectation that prices will rebound and any losses will eventually be recovered. Investors typically are more concerned with market fundamentals, such as price/earnings ratios and management forecasts.

Trading involves frequent transactions such as the buying and selling of stocks, commodities, currencies, or other instruments like cryptocurrency. The goal of trading is to outperform ‘hodlers’ (buy-and-hold investors) by rapidly buying low and selling high, which (theoretically) allows you to take advantage of changes in the market which investors may miss out on because they hold their investments for longer periods of time.

A trader’s style is generally defined by the time frame (‘holding period’) in which they trade. Traders typically fall into one of the following four categories:

A number of variables — including investment capital, time, skill level, and personality — factor into determining the kind of trader someone becomes.

No matter what style of trading you favour, you need to be able to analyse assets and determine which assets to buy, and when to sell them. There are two primary methods for analysing cryptocurrency assets: fundamental analysis and technical analysis. These methods are often considered to be opposite approaches. We will start by looking at fundamental analysis, but the majority of this article will focus on technical analysis.

Candlestick charts are used to identify trends so that traders can make informed trading decisions. These charts help you to identify a cryptocurrency’s opening and closing prices, highs and lows, and overall price range during a specific time period.

Anatomy of a Candlestick Chart

In the candlestick chart above, each candle (green or red bar) represents a period of one month.

Each candle can be broken up into three components: the body, the upper wick, and the lower wick.

Regardless of candle colour, the upper and lower wicks are the highest and the lowest prices reached during that month (between monthly open and close).

Technical analysis hinges on the concept that price action follows a trend. Trend lines are typically diagonal (uptrend and downtrend) or horizontal (support and resistance).

An uptrend on a cryptocurrency price graph such as the one above is a diagonal line that slopes upwards from left to right, indicating that the price is moving up. An uptrend is formed by connecting at least two low points on the price chart, with each low being higher than the previous. Generally an uptrend line which hits at least three low points would be considered validated. An uptrend indicates that buyers are more active than sellers, and this presumption holds true until the trend line is broken.

A downtrend is a diagonal line that slopes downwards from left to right, indicating that the price of the cryptocurrency is moving down. A downtrend is formed by connecting at least two high points on the price chart, with each high point being lower than the previous. Generally a downtrend line that hits at least three high points would be considered validated. A downtrend indicates that sellers are more active than buyers, and this presumption holds true until the trend line is broken.

A resistance line indicates a price level where sellers believe there is not enough demand to push the price further up. Resistance levels can be identified by the price not pushing past a previous high. Resistance lines are typically horizontal trendlines, like support lines. Generally, the more the price pushes into resistance, the weaker the resistance will get.

Wedge formations tend to follow three main rules: a convergence of trend lines, declining volume, and a break from trend lines. A rising wedge can appear during a downtrend when sellers begin to get exhausted, and selling volume drops correspondingly. This allows buyers to briefly take control, which forms a rising wedge. If buyers are unable to provide adequate volume to break upwards, the sellers can take control again and continue the downtrend.

A falling wedge adheres to the same three rules as a rising wedge: trend line convergence, declining volume, and a breakout. A falling wedge can appear during an uptrend when buyers begin getting exhausted and there is a corresponding reduction in buy volume. This allows sellers to briefly take control, but if the sellers are unable to provide adequate volume to break down through the trend line, then buyers can retake control and continue the uptrend.

The bullish rectangle pattern is similar to the rising wedge pattern. A bullish rectangle marks a period where buyers are exhausted, but still hold the strength to keep sellers from taking control. After a consolidation period (sideways movement), the price may surge to a new local high.

The bearish rectangle pattern is quite similar to the falling wedge pattern. A bearish rectangle marks a period where sellers are exhausted, but still hold the strength to keep buyers from taking control. After a consolidation period (sideways movement), the price may drop to a new local low.

A bearish pennant is similar to a bullish pennant, but marks a pause in a downwards-trending market.

The double top pattern is fairly self-explanatory. A double top forms when the price reaches a high, retraces (drops temporarily), and then has a second attempt at breaking through the resistance, but does not succeed. If a coin is bullish and rallies quite hard, a double top can soon become an ascending triangle that breaks upwards. A double top can also precede a price drop.

The double bottom pattern, like the double top, is fairly self-explanatory. A double bottom forms when the price reaches a low, retraces, and retouches the low. A double top won’t always precede a price rise; in fact, if a coin is bearish with little buy support, a double bottom can easily break down further.

An ascending triangle is marked by an uptrend pushing into a horizontal resistance level. As the trend moves closer to the resistance level, the trend lines converge and the price must break up or down. In the case of a break downward, the formation may begin to resemble a double top.

Symmetrical triangles are patterns that form between an uptrend line and a downtrend line with opposing gradients. Symmetrical triangles indicate an even balance between buyers and sellers. As the price moves horizontally towards the apex of the triangle, price volatility may see a temporary reduction. A significant move upwards or downwards is usually seen shortly after periods of low volatility, as seen in the above example.

Bollinger Bands are a type of volatility indicator, useful for trading market ranges, consisting of two moving average lines, placed two standard deviations above and below the central moving average line. The appearance of Bollinger Bands is dependent on the current market state; thin bands mean the market is not very volatile, and wide bands indicate a volatile market.

The Ichimoku cloud is a lagging indicator, meaning that it is based on previous price action. To keep things simple, we will focus only on the Senkou Span, which is composed of red and green bands/clouds that will hover over or under the current price, depending on how the cryptocurrency is trending.

The SMA takes the average price over a set period of time, often 30, 100 or 200 days. The EMA utilises a weighted average of those time periods, which means there is more weight placed on recent days, rather than taking an evenly-weighted average of all days within the span being analysed. This is why the moving average lines are closer to the current price in the EMA compared to the SMA.

The Moving Average Convergence Divergence (MACD) can be somewhat confusing at first. The MACD is a combination of a fast-moving EMA (taken over a shorter period, such as 10 periods), a slow-moving EMA (from a longer period, perhaps 30 periods), and the difference between the two (displayed as a histogram). Generally, when a new trend is forming, the MACD lines will converge and eventually cross each other and begin to diverge, indicating a trend reversal. At the point of the MACD fast and slow lines crossing over, the histogram will show no value as the difference between the fast and slow MACD lines is zero.

The order book is a visual and dynamic display that showcases a real-time list of orders placed by buyers and sellers on a cryptocurrency exchange platform.

The buy side of the order book shows all open limit buy orders that are below the current trading price. Where there are many orders at a specific price level, this is called a buy wall — identifiable by a steep stairway. Buy walls often act as support levels, but if selling pressure exceeds buying pressure, the buy wall will be eaten into and eventually the price will drop below that support level.

The sell side of the order book shows all open limit sell orders that are above the current trading price. Where there are many orders at a specific price level, this is called a sell wall — identifiable by a steep stairway. Sell walls often act as resistance levels, but if buying pressure exceeds selling pressure, the sell wall will be eaten into and eventually the price will rise above that resistance level.

A bullish divergence appears when lower lows are set on the price chart, and higher lows are set on the oscillator — in this case, the Relative Strength Index. As you can see in the chart above, there was a rapid increase in price shortly after the identified bullish divergence played out. However, take note that while there was a momentary spike in price, the overall downtrend remained intact.

Both fundamental and technical analysis have advantages and disadvantages. While both approaches have lots of supporters, there are also people who don’t think either of these analytical methods are effective. Supporters of the Efficient Market Hypothesis believe that it is nearly impossible to use fundamental or technical analysis to reliably beat the market.

In the end, traders and investors will take the approach that they feel works best for them.